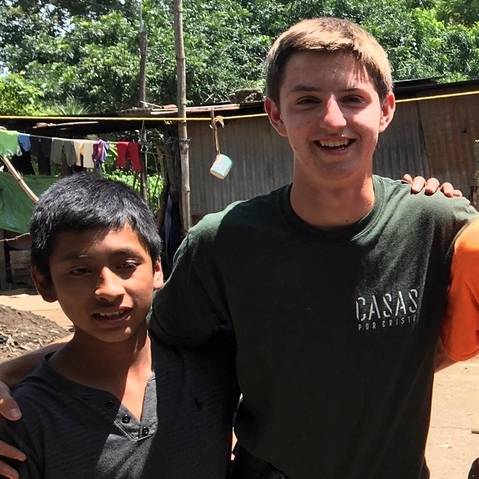 I went on my first mission trip with Casas por Cristo in the summer before my eighth grade year. At that time, my church would send a team to build in Juárez, México every summer and January and a team to San Raymundo, Guatemala every summer. My mother and both of my older siblings had been on several trips with Casas to the Juárez location in previous years, and I had many chances to go along. However, my family only went on the trip in January, and at the time, I didn’t think it would be worth missing a week of school to go build a house in a foreign country. The summer before my eighth grade year, my parents had planned on going with my church team to Guatemala to build. Two weeks before the trip, my mother got a call from the team coordinator saying that someone on the team was no longer able to go on the trip, asking if she knew anyone who wanted to go in their place. My mother walked into the kitchen where I was standing and asked me if I wanted to go to Guatemala. “Sure,” I said. Little did I know that I had so nonchalantly volunteered for an experience that would change my life.

When we got to Guatemala, I was amazed by how different of a world it was than America. I had heard the stories of how hard some people had it, but when I saw it with my own eyes, it hit me like a rock. Throughout that week, I was amazed at how God was working through us to provide two families with sturdy homes built on firm foundations. Although I could not speak the same language as the families we built for, I could see and feel how thankful they were. Every time the father looked at his new house, I could tell how thankful he was that he had a home of his own, where he and his wife could raise his children protected from whatever harm the world might bring. I could see in the children’s faces how overjoyed they were at the four sturdy walls around them. At the end of the week, I looked at the house. Just a few days ago, that was only dirt, I thought, and God made it a house.

When it came time to leave, I didn’t want to go back to the States. I didn’t want to go back to having so much when so many people had so little, to wanting the latest and greatest when there were so many people who just needed the basics. When I did get back to the States, I knew I couldn’t stay for long. God had ignited a fire in me, and I began to tell all of my friends and classmates about what I had experienced, inviting them on trips and encouraging them to experience it for themselves. I am now a sophomore in high school, and since then, I have gotten to share my passion for the Casas por Cristo mission work with several friends and have made many new ones along the way!

On a return trip to Guatemala in the summer of 2017, I got the chance to visit one of the families we built for two years previously. Having moved into the house God had built for him, the father of the family was able to quit his dangerous job of making fireworks. He has turned his old house into a workshop where he now makes guitars. With the money he has made from his new job, he is able to send his children to school at the Morning Glory Christian Academy.