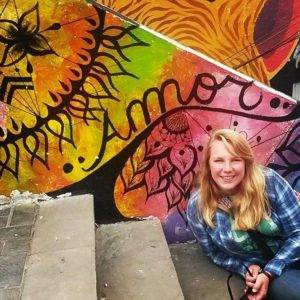 I got involved with Casas por Cristo through my family, who got involved through a church camp we went to as little kids. My mom was actually the first one in our family to go down to Juárez to build a house. I was in elementary school, and she was a youth group leader at church. As soon as she got back, I knew I wanted to go, too. I built my first house with Casas when I was in high school, and it was the first time I ever stepped outside the United States. Even now, after building more than 40 houses, that first house stands out to me so clearly. I remember being in Juárez, and looking south, thinking about all of the other countries, towns, and families that lived in that direction and that one day I’d get to know some of them, too. I don’t always see the direction that God wants for me super clearly, but that week it was very clear.

After that trip, I built several other houses with my family, my church, and even my friends. I chose a major that I knew would let me work in International Development, and I learned Spanish. When I was in college, I got the opportunity to be an intern with Casas in Guatemala, which involved leading builds, connecting with churches from around the United States, and my favorite part, making lots of friends in Guatemala. I learned so much about the world and myself, and felt my faith in action in a way I had never felt before. I cried on the plane back from Guatemala at the end of the summer (poor Jake and Tyler who had to sit with me) because I just didn’t want to leave. Lucky for me, God had it in his plans for me to come back and intern two more times. I always thought Casas needed an Intern for Life shirt for people like me. The people I met in Guatemala, the team members I met, and the interns I worked with are now lifelong friends and people that continue to inspire me.

I am now a year into being a Peace Corps volunteer in a small town in northern Peru, and I thank God immensely for all of the time I have spent (and will spend) with Casas. I find that the things I learned from team members and families during builds in México and Guatemala are things that I put into practice every day here in Peru. My time with Casas taught me about grit, perseverance, faith, and empathy. And lucky for me, it is a family ordeal. My dad builds houses as a volunteer, and my two brothers interned with Casas, as well. I can see how Casas has also had an immense effect on the lives and vocations of my two brothers. To say that Casas has been important to me is an understatement, and I thank God for how it has moved and shaped my life, as well as the lives of many others.